There are many kinds of emergencies which you may encounter during instrument flight. The most common among these are:

To understand how spatial disorientation is a factor in instrument flight, we must develop an understanding of the vestibular orientation system of the inner ear. 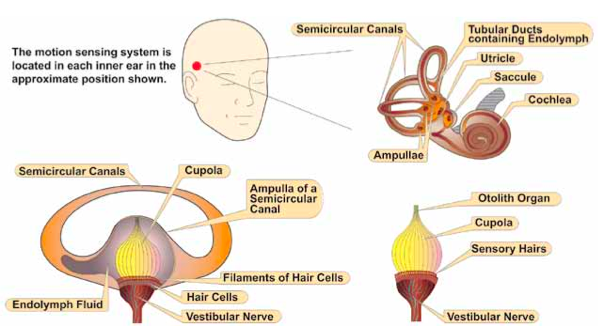 The inner ear has two major parts concerned with orientation: the semicircular canals and the otolith organs. The canals are at right angles to one another in three different planes (think roll, yaw, and pitch) and they detect angular acceleration of the body. The otolith organs detect linear acceleration and gravity.

Each canal is filled with fluid, and in the center of the canal is the cupola which rests upon sensory hairs located at the end of the vestibular nerves. It is the movement of these hairs within the fluid which causes sensations of motion.

This illustration demonstrates the relationship of the axes of an airplane with the planes of the semicircular canals within the inner ear.

Now, to understand how spatial disorientation occurs, let's walk through an example. From straight and level flight, if the aircraft is placed into a turn, it puts the semicircular cancal and its fluid into motion. The fluid lags the movement of the canal, and the canal wall and cupula move in the opposite direction from the motion of the fluid.

When the aircraft returns to straight and level flight, the fluid moves briefly in the opposite direction sending a signal to the brain interpreted as movement in the opposite diretion. The pilot may then erroneously bank the airplane again, which could lead to a number of very dangerous flight attitudes. 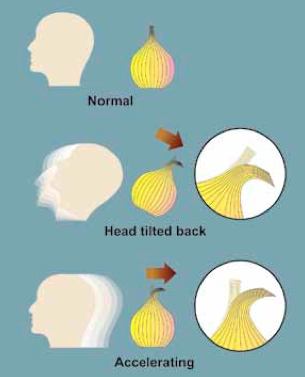 Here is an illustration of how the otolith organs detect linear acceleration and head tilt.

The danger of spatial disorientation is that, if the pilot begins to listen to his vestibular senses instead of trusting the flight instruments while in instrument conditions, it will inevitably lead to an unusual attitude or loss of control of the aircraft. The fix, happily, is simple: Trust your flight instruments and not your senses!

Another instrument flight emergency is that of equipment failure. This can manifest in many ways:

According to David Bamford, electrical failure could mean the loss of some or all of the following flight instruments:


If that list doesn't scare you, it should! A couple of things become very obvious from reading the above. First, a portable radio and navigational backup like an iPad with EFB software or a Garmin 496 handheld GPS will be worth their weight in gold if you lose electrical power in IMC. Second, you should always know where the nearest VFR weather is before embarking upon an instrument flight.

So remember when I said above to trust your instruments? Ok, well here's the one case when you can't. Sorry!

The attitude indicator and heading indicator (if not an electrical HSI) are gyros driven by air pulled through a serious of plumbing to a vacuum pump. Sadly, these pumps are notoriously unreliable (especially after about 500 hours in service) and can fail without warning.

The surest way to guard against an extremely hazardous, unnoticed, partial panel situation is to include your vacuum gauge in your scan, and to verify the non-vacuum instrument indicators against the vacuum ones. For example, if your attitude indicator is indicating a turn to the left, and the turn coordinator is indicating level flight or a bank to the right, there's a problem!

In any case, make no mistake, if you find yourself in a partial panel situation in instrument conditions, you have an absolute, no bones about it, emergency! Declare an emergency with ATC immediately, cover the affected instruments if possible, and start evaluating options like: How far above me is open sky and can I climb there? How far is the nearest VFR and can I make it? How high are the ceilings and what approaches do I have available? Am I willing to risk my life on my partial panel skills (which I probably haven't practiced since my instrument training days)?

Occasionally, a single gyro or other air instrument will fail. The possibilities here are as varied as there are types of flight instruments, but suffice to say instrument cross check is your best insurance against any resulting danger. Typically a single instrument failure is not a major dilemma, but consider that it can happen and will happen at the least opportune moments.

The various failure modes of the pitot static system are explained on my instruments page. A low approach in instrument conditions during which your altimeter stops working will definitely be cause for concern. Please treat it like the emergency it is.

Garmin G1000, G500, G600, Avidyne, Chelton, Honeywell, etc are all integrated glass cockpit systems which take the place of the standard six pack instrument array. The systems are generally extremely reliable, but computers being what they are, they can and do fail. When they do, it may not be in a manner that has ever been seen by anyone but you, so keep in mind that's no time to play test pilot and complete a low approach on a wing and prayer (so to speak).

All airplanes ceritifed with glass cockpits are equipped with an airspeed indicator, altimeter, attitude indicator, and magnetic compass at a minimum. You will do well to train to be competent on solely those backup systems.

Lost comms obviously follows in a loss of electrical power situation, but it warrants its own category here because the lost communication procedures are both specific and thorough.

In the event that you lose communications with ATC, you should squawk 7600 and listen for ATC instructions over any operational receiver including navigational receivers. ATC may try to contact pilots over VOR, VORTAC, NDB.

If the radio fails while on IFR clearance, but in VFR conditions, continue flight under VFR if possible and land as soon as practicable. If continuing VFR is not possible, then follow the following practices for your route and altitude.

The route flown should adhere to the following order:

The altitude flown should be the highest of the following: