While taxiing an aircraft in preparation for an IFR flight, make the following checks: 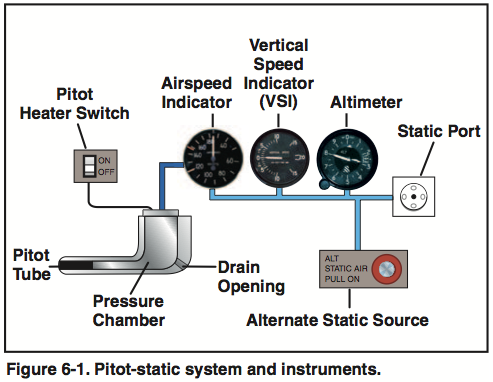 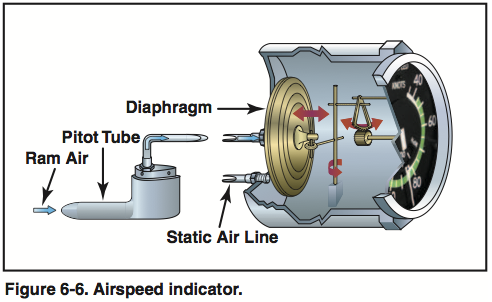 The altimeter contains a stack of sealed aneroid wafers which are surrounded by a casing connected to the static source. As the air pressure varies with altitude, the expansion and contraction of the wafers (due to decreasing and increasing static pressure respectively) is translated via mechanical linkage to an altitude on the face of the altimeter. 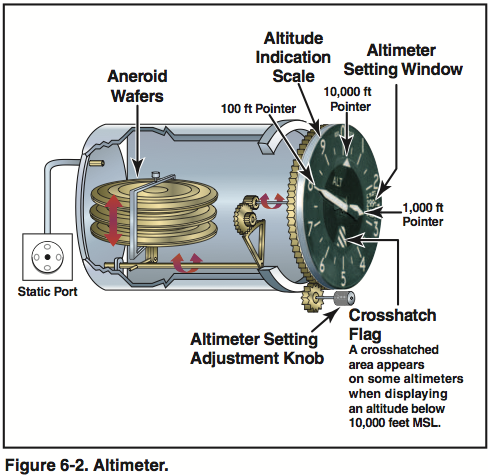 The vertical speed indicator is also a differential pressure gauge, but it uses only the static source. A diaphragm is connected to the static source, as is the surrounding instrument case. However, the case is connected via a restricted oriface (calibrated leak), so it does not equalize as quickly to pressure changes.

Thus, when the airplane ascends or descends, the diaphragm expands or contracts immediately, but the instrument case pressure changes more slowly, registering a pressure difference which is translated via mechanical linkage to the face of the instrument. 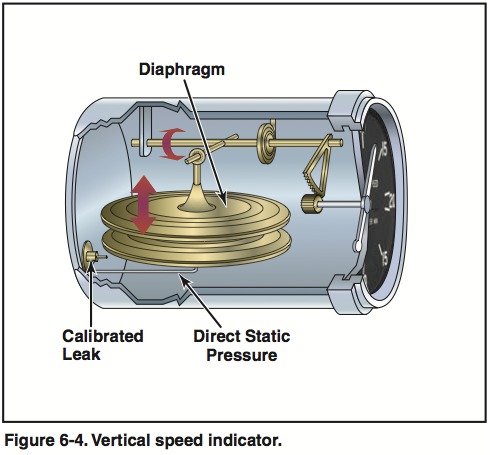 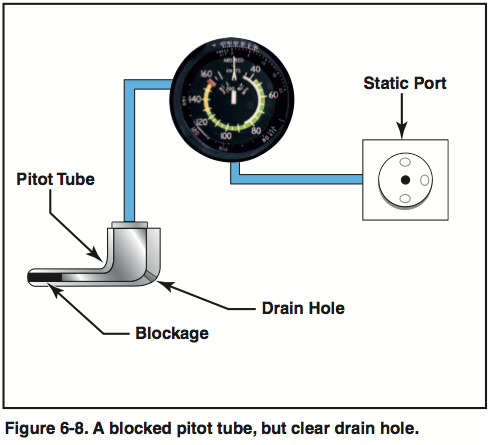 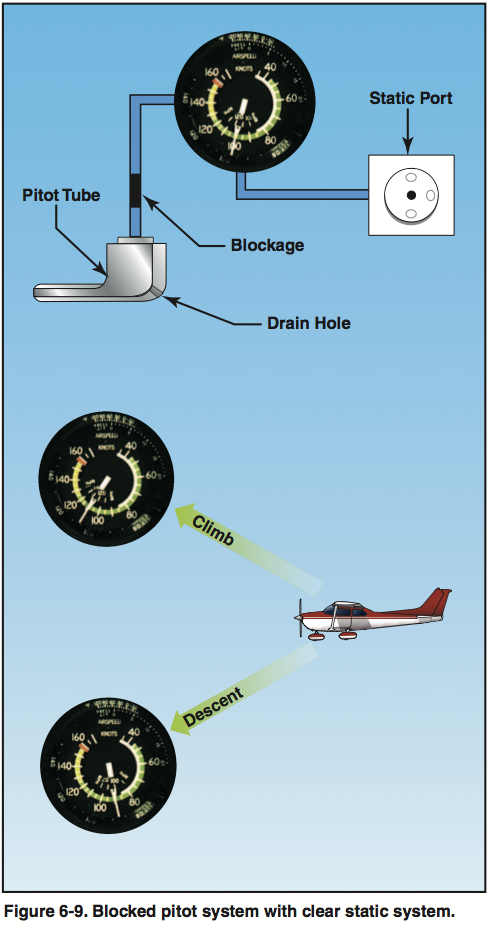 For further details, read Wet vs Dry Pump on N252Q.com.

The attitude indicator is subject to certain errors. A skidding turn followed by a return to straight-and-level, coordinated flight, will then indicate a turn in the direction opposite the skid.

Also, movement of the vanes by centrifugal force during a normal, coordinated turn causes precession of the gyro toward the inside of the turn. The error is most apparent in a 180° steep turn. A 180° steep turn to the right followed by rolling the aircraft straight-and-level flight will show a slight climb and turn to the left. This precession error, normally 3-5°, is quickly corrected by the erecting mechanism. 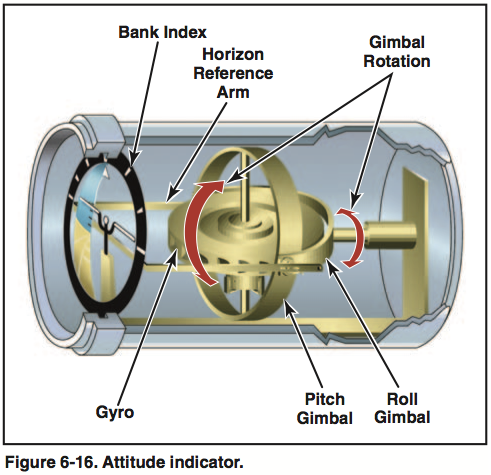 The heading indicator also depends upon rigidity in space. The gyro is mounted in the vertical plane with a compass card fixed to it. Because the gyro remains rigid in space with respect to the vertical plane, the card provides heading information as the airplane revolves around its vertical axis. 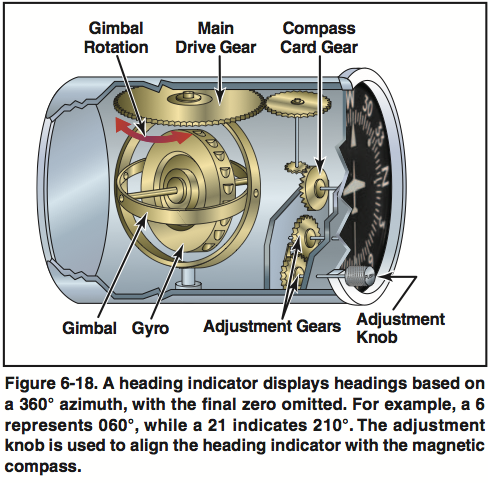 The turn coordinator is typically powered by the electric system, thus making it an independent source of information with respect to the AI and HI. The gyro rotates in the vertical plane and the gimbal is canted at about 30° allowing the gyro to sense both rate of roll and rate of turn. The turn coordinator relies on the principle of precession.

As the aircraft rotates about the yaw or roll axis, the principle of gyroscopic inertia causes the gyro to resist the change in its rotational axis about the free axis. This resisting force works against a spring; thus, a slow rate of turn deflects the gyro slightly while a higher rate of roll or yaw deflects it more. The gimbal is linked to the indicator dial on which is the rear view of the miniature airplane. From Wikipedia.com. 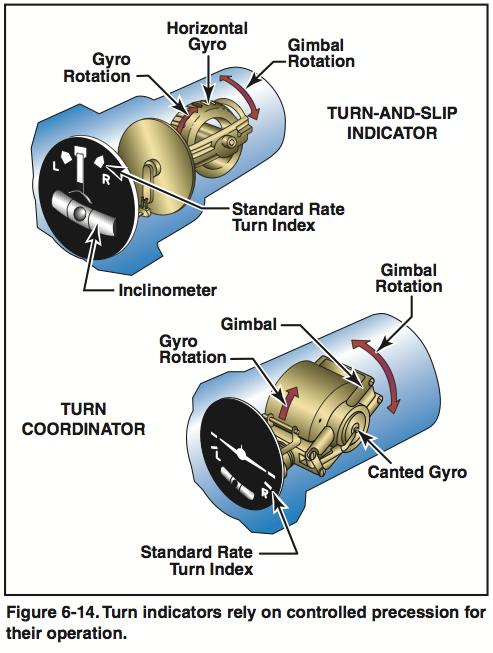 The magnetic compass contains two steel magnetized needles fastened to a float around which is mounted a compass card. The needles are parallel with north-seeking ends pointing in the same direction.

Because of magnetic dip (the vertical component of the Earth's magnetic field), the mag compass displays certain errors in turning and acceleration. Briefly those are:

Timed turns:
Worth noting that vertical compass cards also display some error, but they are less pronounced than that of the magnetic compass. 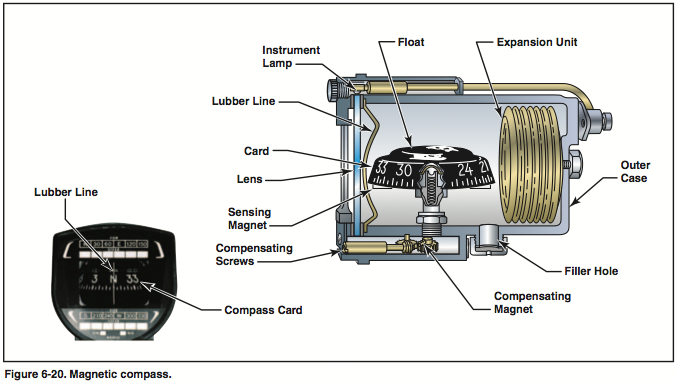