The propeller governors of a twin-engine airplane works like that of a complex single-engine plane, but in reverse. In a twin engine, oil pressure is used to turn the blades to low pitch (high RPM) so that if oil pressure is lost, the pilot can feather the engine to reduce drag, as previously discussed.


A constant-speed propeller uses a governor to control the RPM of the engine. It does so with the help of mechanical linkage from the propeller control knob/lever to a speeder spring, centrifugal flyweights, and a pilot valve with allows the flow of oil either from or to the oil sump.

The propeller control in the cockpit compresses or relaxes the speeder spring, which affects the force exerted on the flyweights. As those move either out or in, the mechanical linkage to the pilot valve causes it to move in a direction which allows oil to flow either into or out of the propeller hub, moving a piston, which forces the blades to higher or lower pitch.

In this condition, the centrifugal force on the flyweights is equal to the force of the speeder spring. Thus the pilot valve is neutral, closing off both the oil sump and pressure lines, allowing no oil to flow to or from the propeller hub. 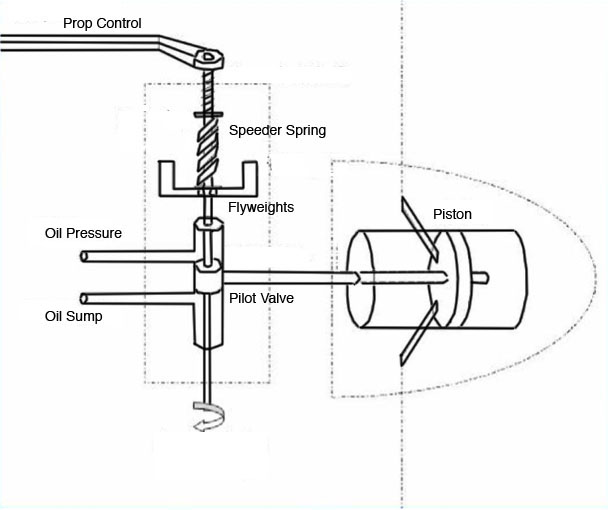 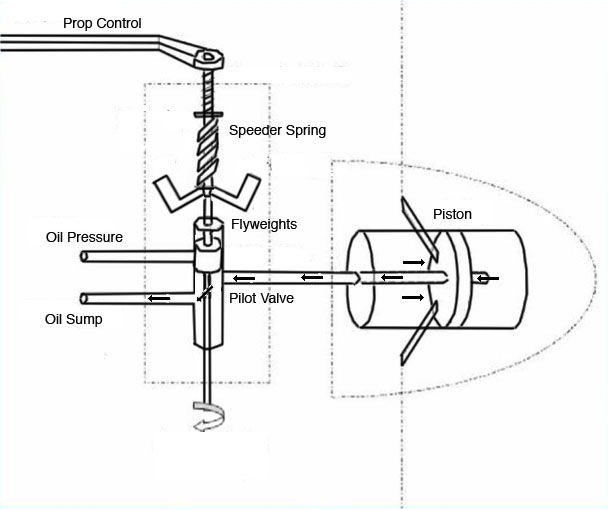 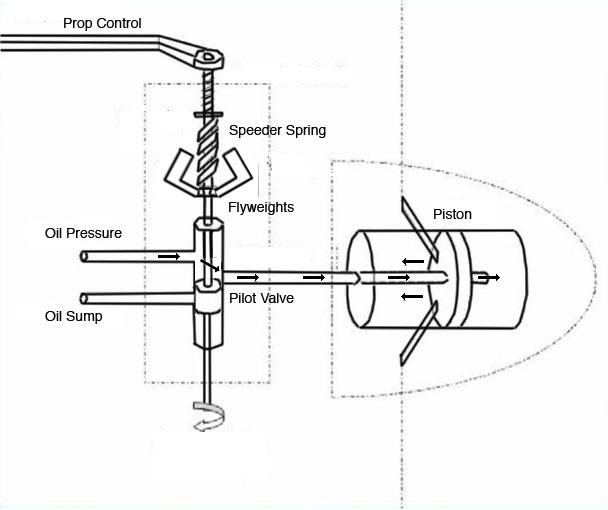 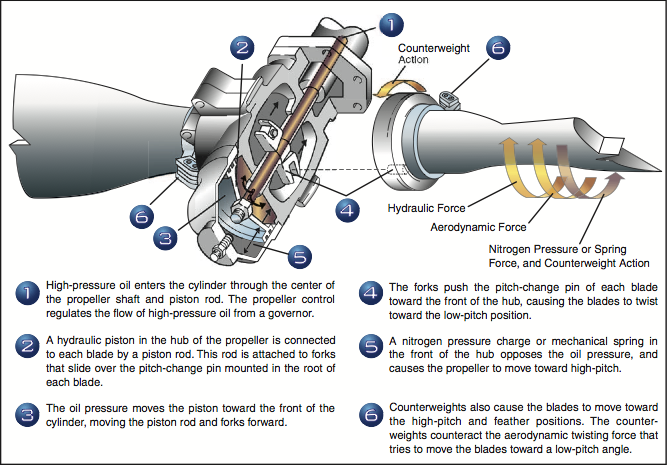 At lower manifold pressure settings, the propeller may go "off the governor", which simply means the engine isn't producing enough power to allow the governor to properly regulate the RPM. In this state, the flyweights will be deflected fully inward, and the propeller now acts as if it were fixed pitch. The governing range is generally indicated by the green band on the manifold pressure gauge.

The answer is there are lock pins in the propeller hub which prevent feathering below 7-800 RPM to prevent the propeller from feathering during start and shutdown. During normal operations, centrifugal force retracts the locks, allowing the propeller to feather, but you must remember to feather a failed engine before the locks engage. Both feathering and starting a feathered engine are not recommended due to excessive stress and vibrations generated.

To start a feathered engine in flight, the pilot moves the prop control out of feather to release this pressure. Once oil flows into the governor, the blades are driven towards high RPM (low pitch) and the propeller begins to windmill.

You may also encounter unfeathering accumulators on some multi-engine airplanes. These aid substantially in starting a feathered engine by storing oil under pressure (typically compressed air or nitrogen) and releasing it into the propeller hub which forces the blades out of feather.

Out of sync propellers cause an unpleasant wharbling or vibration in the cockpit of a multi-engine airplane. Aside from your hands and ears, there are systems which can be used to synchronize the propellers and minimize or reduce this effect.