If we lose one engine, the airplane reacts in the following manner:


So what is our intuitive reaction (note: not necessarily the correct reaction) to correct for these? Most people would probably say:


Sounds reasonable, right? Sadly, as you will read below, doing only the above probably will not even keep you in the air, or best case, it will constitute an inefficient flying regime should you be able to maintain altitude and control. Let's talk about why that is...


I somewhat unfairly left out some details from our scenario above. Things like, what is our current power setting, airplane weight, flap and gear configuration, angle of attack, etc. All of these things are important considerations when flying with half our engines working.

You know from your private pilot days that the four fundamental forces of flight are:


When we lose an engine in a multi-engine airplane, which of these are affected adversely?

So obviously our weight doesn't change just because one engine loses power, but weight is a VERY important consideration in flying twin engine aircraft. In a nutshell, the lighter the airplane, the greater chance you have of achieving a positive climb on one engine, or at least a higher OEI service ceiling. In fact, at gross weight, many or most piston twins will not climb at all. Maybe you're thinking of buying a twin for all the load-hauling capability, but the truth is that when flying a piston multi-engine airplane, light is right!

Our reduced thrust is obvious enough. We also have asymmetric thrust which, along with the drag of the propeller (discussed below), leads to that enormous yawing motion you noted. Moreover, the asymmetric thrust leads to a roll towards the dead engine by way of aerodynamic coupling - the wing with the operating engine is moving faster and producing more lift.

And finally we have drag. So it probably goes without saying that, in the event of an engine failure, we want to reduce drag as much as possible in order to ensure a climb or maintaining altitude. This means that, if they're not already up, flaps and gear should be raised as soon as possible.

But there is another consideration - the propeller. A windmilling propeller creates drag equivalent to (or exceeding that of) a fixed disc the same diameter of the propeller. Reducing this drag will provide the single largest performance increase of any action the pilot can take.

So how do we reduce it? We feather the prop. That may be a new concept to you, as it is specific to multi-engine airplanes, with few exceptions. To feather means to bring the blades to a very large angle (80-90°) to the relative wind. This will stop the propeller from windmilling and offer the best drag profile for the inoperative engine/propeller. It is a critical item to complete to ensure a safe outcome of our emergency.

Here's a graphic explanation of the above, which includes drag lines for both windmilling and stationary propellers. Note that a stationary, unfeathered propeller presents substantially less drag than one which is windmilling. 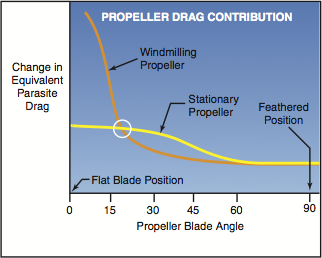 And here is what the propeller looks like when feathered. Note the left prop below:


So we've identified some of the control issues resulting from our gut reaction to an engine failure. There is another which bears additional discussion. If we were to simply level the wings and center the ball with rudder, the airplane will be slipping through the air, as it will no longer lined up with the relative wind.


Here's a graphic representation of what is happening during the sideslip:

As you might imagine, the rudder is going to be fairly important in maintaining control with one engine inoperative, so we need it to be as effective as possible. We must, therefore, eliminate the sideslip.

So how can we fix the sideslip and fly straight again? We need to do two things:

1. Using the rudder, deflect the ball about 3/4 of its width toward the good engine
2. Bank approximately 2.5° towards the good engine (remember: "raise the dead")

So why do these exact, seemingly arbitrary, control inputs create the desired zero sideslip? Because that is what experiments with yaw strings have shown to be necessary. There is no instrument that will directly tell the pilot the exact requirements for a zero sideslip condition, therefore, a yaw string is the best indicator.

Additionally, zero sideslip flight also differs with make and model, and with available power and airspeed. If the airplane has a critical engine, it will also depend on which engine failed due to P-factor. In the Baron a 3/4 ball deflection toward good engine and 2.5° bank will eliminate the slip. You should never need more than 5° of bank, as that would fall outside of the certification requirements for the airplane.

Regarding the bank, we can dig a little deeper. Bank corrects sideslip by creating an equal force in the direction opposite the slip to neutralize force of sideslip. You already know that turning an airplane trades some amount of vertical lift for horizontal lift. In doing so, we are creating a force equal and opposite to that of the sideslip in an effort to "zero" it out.

This is what the zero sideslip would look like from an aerodynamic perspective:

Lastly, keep in mind that all performance charts in the POH for single-engine flight were determined with zero sideslip.


No self-respecting text on controlling a multi-engine aircraft would be complete without a nod to vortex generators. Vortex generators are small airfoils placed a few inches apart on or before the control surfaces of the aircraft. They are typically installed to have a 12-15° angle of attack to the airstream. Here is a picture, they are located on the top, front part of the wing shown. 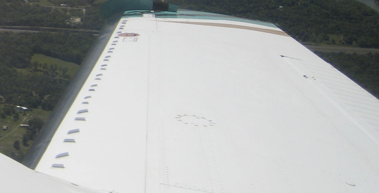 Aside from all the technical details, suffice to say that vortex generators vastly improve the controllability of an aircraft at slower airspeeds.