Single-pilot IFR is widely-regarded as the most difficult, busiest time you'll spend in a cockpit. The accident statistics also bear this out in loss of control and controlled flight into terrain (CFIT) accidents in IMC.

From the Instrument PTS: Single-Pilot Resource Management (SRM) is defined as the art and science of managing all the resources (both on-board the aircraft and from outside sources) available to a single-pilot to ensure that the successful outcome of the flight is never in doubt.

You will be expected to:


Defined as the "systematic approach to the mental process used by aircraft pilots to consistently determine the best course of aaction in response to a given set of circumstances." There are several models developed to aid pilots in this process:

There are also five hazardous attitudes that diminish our ability to make good decisions. They are presented here along with their antidotes:


Risk is defined as the probability and possible severity of accident or loss from exposure to various hazards, including injury to people and loss of resources. Risk management is the logical process of weighing the potential costs of risks against the possible benfits of allowing those risks to stand uncontrolled. 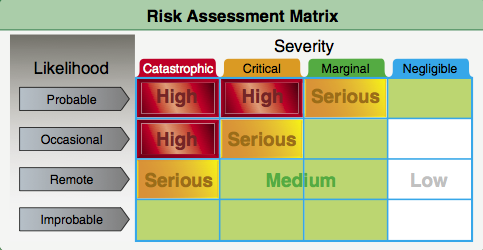 There are at least two mental checklists a pilot can utilize to mitigate risk.

Task management (TM) is the process by which pilots manage the many, concurrent tasks that must be performed to safely and efficiently fly a modern aircraft. You will be expected to appropriately prioritize tasks, complete tsks in a timely manner, and execute all checklists and procedures. TM entails the following:

Situational awareness is the accurate perception and understanding of all the factors and conditions within the four fundamental risk elements that affect safety before, during, and after the flight. More succinctly, is the the pilot's mental picture of everything happening around him/her during any portion of a flight.

Controlled flight into terrain (CFIT) is a type of accident generally resulting from lack of visibility or cloud clearance, and a failure to comply with instrument procedures which ensure obstruction and terrain clearance. According to the FAA, CFIT accidents account for 17% of all general aviation fatalities. The pilot will be expected to:

Automation management is the demonstrated ability to control and navigate an aircraft by means of the automated systems installed in the aircraft. Most importantly, knowing when to use it.

You will be evaluated by the examiner based on the following matrix: 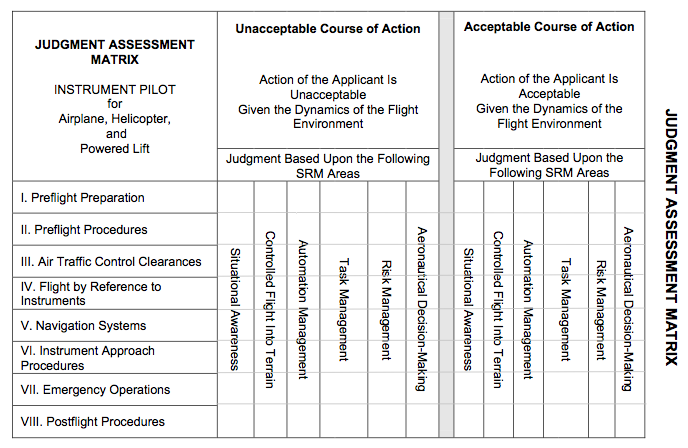