Precision approaches give a pilot both lateral and vertical guidance throughout the approach. They also typically include a decision height (as opposed to a Minimum Descent Altitude), at which the pilot must execute the missed approach procedure if the runway environment (or one of several elements) is not in sight. These elements are:

The Instrument Landing System (ILS) is one of the most precise and accurate approach NAVAIDs currently in use. Generally speaking, the ILS will bring the pilot within 200 feet above touch down zone elevation and visibilities as low as 1800 RVR (runway visual range).

There are three categories of ILS approaches: CAT I, CAT II, and CAT III. The Basic ILS is CAT I, and the requirements are that the pilot must be instrument rated and current. Both Cat II and III approaches require special ground and airborne equipment, typically reserved for professional pilots, crews, and airlines. Also require special training.

For reference, here is a complete ILS system from the AIM (click to enlarge): 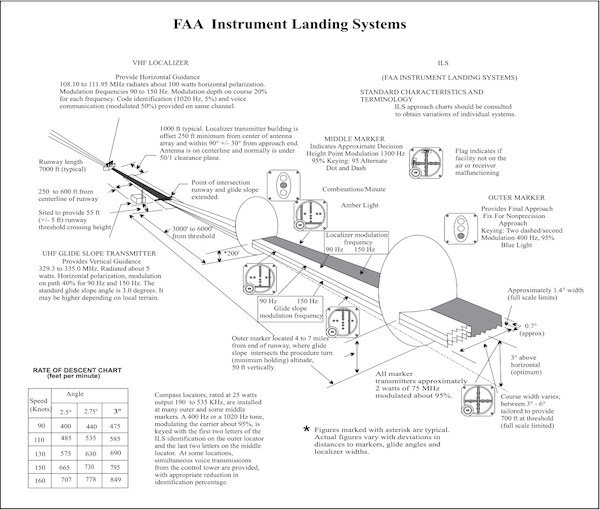 The advent of WAAS (wide area augmentation system) allows pilots to fly a GPS approach with very precise vertical guidance. WAAS covers 95% of the country 95% of the time. WAAS typically supports vertical guidance approach minimums as low as 200 feet HAT (height above touchdown) and 1/2 sm visibility. In that regard, it is very similar to an ILS, but it requires substantially less investment in equipment and maintenance than an ILS.

According to Garmin, a WAAS-capable receiver can give you a position accuracy of better than three meters 95 percent of the time. From the article:

WAAS consists of approximately 25 ground reference stations positioned across the United States that monitor GPS satellite data. Two master stations, located on either coast, collect data from the reference stations and create a GPS correction message. This correction accounts for GPS satellite orbit and clock drift plus signal delays caused by the atmosphere and ionosphere. The corrected differential message is then broadcast through one of two geostationary satellites, or satellites with a fixed position over the equator. The information is compatible with the basic GPS signal structure, which means any WAAS-enabled GPS receiver can read the signal.

Minimums on the approach chart will read as one of the following:

LAAS is Local Area Augmentation System. Here's what the FAA website has to say about it:

The Local Area Augmentation System (LAAS) is a satellite navigation system being developed by the FAA. LAAS uses signals from the Global Positioning System (GPS) to develop an extremely accurate navigation signal that focuses its service on the airport area (approximately a 20-30 mile radius).

Like the Wide Area Augmentation System (WAAS), LAAS relies on GPS for basic navigation signals. However, with WAAS, GPS-corrected navigation signals come from space, broadcast from WAAS geostationary satellites. With LAAS, the GPS-corrected navigation signal is broadcast from a LAAS VHF data broadcast transmitter at or near the airport. Although LAAS and WAAS will operate independently, LAAS will complement WAAS by providing GNSS Landing System (GLS) landing service for Category II/III precision approach operations. LAAS will also provide GLS Category-I capability at locations where WAAS service may not be available. Other differences between WAAS and LAAS include the manner in which the availability of the systems are computed, the manner in which avionics receive information on approach procedures, and the vertical alert limits (VAL) associated with each system.

Microwave Landing System is a precision instrument app alternative to ILS. The MLS has multiple advantages including increased number of frequencies, compact ground equipment, etc. Advent of civil use GPS caused MLS installation to be deferred and by 1994 it was officially cancelled by FAA. It is highly unlikely that most pilots will every encounter MLS approach, and even less likely they will have proper equipment installed in the aircraft.

Precision Approach Radar is a radar approach (provided via ATC) which provides both vertical and lateral guidance. The final approach course of a PAR approach is always directly aligned with runway centerline. They are most commonly found at military facilities today, and are somewhat rare given the complexity and expense of the equipment involved.

An example of PAR instructions are found in this AvWeb article:

Now the comments came every five seconds, "On course. Approaching glidepath … Slightly right of course … right of course, fly heading 113 … Slightly right of course, correcting. On glidepath." The Herc began a descent without any more instruction than "on glidepath." I guess those Navy boys had their numbers dialed in and winds weren't too challenging, because the rest of the approach consisted of the controller issuing one minor heading change -- two degrees -- and saying "on course, on glidepath" until the pilot broke it off at 250 feet AGL for landing.