This page will attempt to cover some of the various types of IFR navigational aids and their respective attributes.

Ground based stations that transmit on 108.0 - 117.95 and provide magnetic bearings to and from the station. Picture a wheel with spokes coming out in every direction.

Three types and an airplane's altitude determine the range of the signal:

The VOR equipment in the airplane consists of a VOR receiver and an omnibearing selector: 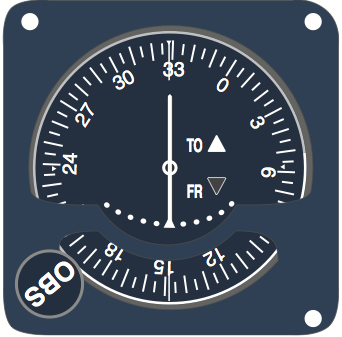 The OBS shows the relative position of the selected radial and whether the radial will take you TO or FROM the station. An HSI (horizontal situation indicator) performs a similar function but because the course indicator is overlaid on a heading indicator, it improves situational awareness. Note that you should always use the front course setting on a HSI, even when flying a backcourse, in order to avoid reverse sensing. 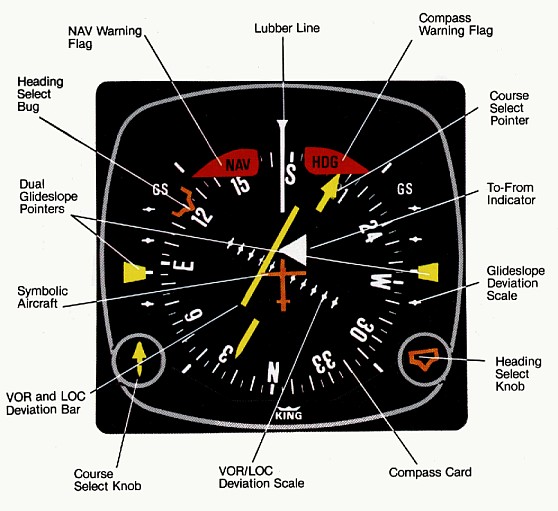 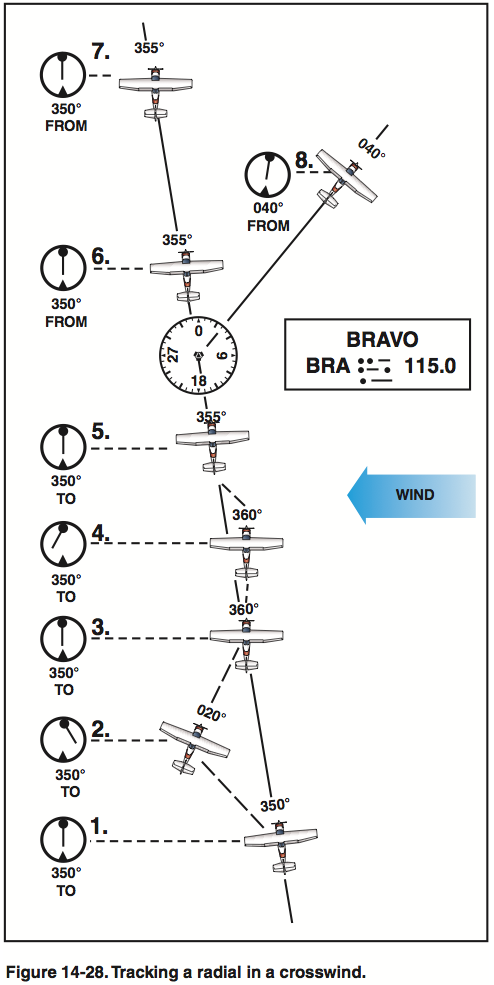 Measured the slant range distance to a station. Only present in VOR/DMEs and VORTACs. Pilot simply selects the desired VOR station and the paired DME UHF frequency is automatically selected for display on the installed DME equipment. Because the distance shown is slant range, error is greatest when directly over a station.

A system of 26 satellites orbiting approximately 11,000nm above the Earth. To get a 3-dimensional fix (longitude, latitude, and altitude) on an aircraft, a minimum of 4 satellites must have line of sight to the GPS receiver antenna. Most common general aviation GPS receivers are the Garmin 530 and 430, and the G1000 glass cockpit system.

GPS has significantly altered the navigational landscape, allowing for more direct routing than the system of VOR airways. However, the student should exercise caution to not become too dependent on GPS to the detriment of other important navigational skills.

GPS receiver verifies the integrity of signals received from GPS sats thru Receiver Autonomous Integrity Monitoring (RAIM). RAIM needs minimum of 5 satellites in view or 4 and a barometric altimeter.

To be installed and approved for use under IFR, a GPS receiver must be certified under TSO C129a or TSO C146a.

A transponder is the airborne portion of the secondary surveillance radar system. Without a transponder, ATC will only see a target on primary radar, and the pilot will be unable to operate in some controlled airspace. The transponder has four numbers, each from 0-7 for a total of 4096 total possible codes.

As part of an IFR clearance, the pilot will receive a discreet code ("squawk") to enter into the transponder such that ATC can quickly identify the airplane. Additionally, many transponders now contain Mode C capability which encodes the airplane's altitude and transmits that to the ATC radar screen to aid in separation services. Mode C altitudes are always transmitted as pressure altitudes.

The flight management system is a sophisticated computer system installed in many aircraft to allow automation of a number of navigational and aircraft management tasks. The original purpose was the elimination of separate crew members such as flight engineers and navigators.

A flight management system (FMS) is a fundamental part of a modern aircraft's avionics. An FMS is a specialized computer system that automates a wide variety of in-flight tasks, reducing the workload on the flight crew to the point that modern aircraft no longer carry flight engineers or navigators. A primary function is in-flight management of the flight plan. Using various sensors (such as GPS and INS) to determine the aircraft's position, the FMS can guide the aircraft's autopilot along the flight plan. From the cockpit, the FMS is normally controlled through a Control Display Unit (CDU) which incorporates a small screen and keyboard. The FMS sends the flight plan for display on the EFIS, Navigation Display (ND) or MultiFuction Display (MFD).

The modern FMS was introduced on the Boeing 767, though earlier navigation computers did exist. Now, FMS exist on aircraft as small as the Cessna 172. In its evolution an FMS has many different sizes, capabilities and controls. However certain characteristics are common to all FMS.