A helicopter is subjected to two types of relative wind. The horizontal variety provided by forward airspeed and/or the rotor moving through the air, and a vertical "induced flow" produced by the main rotor system. 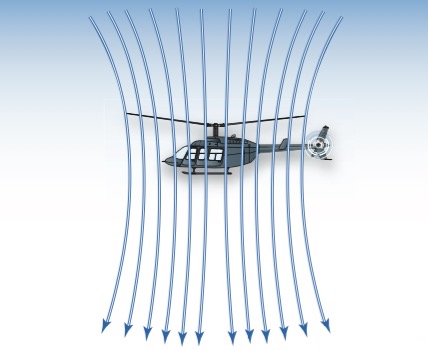 Here we show the aerodynamic effect of induced flow. This first image shows that when induced flow is reduced (or eliminated) it increases the angle of attack.

This image shows that when induced flow increases, it reduces the angle of attack.

The reason we have greater rotor efficiency in an in-ground effect hover is because the induced flow is reduced by the friction of the surface over which we are hovering. The reduced induced flow leads to a greater angle of attack, which in turn leads to greater production of lift. 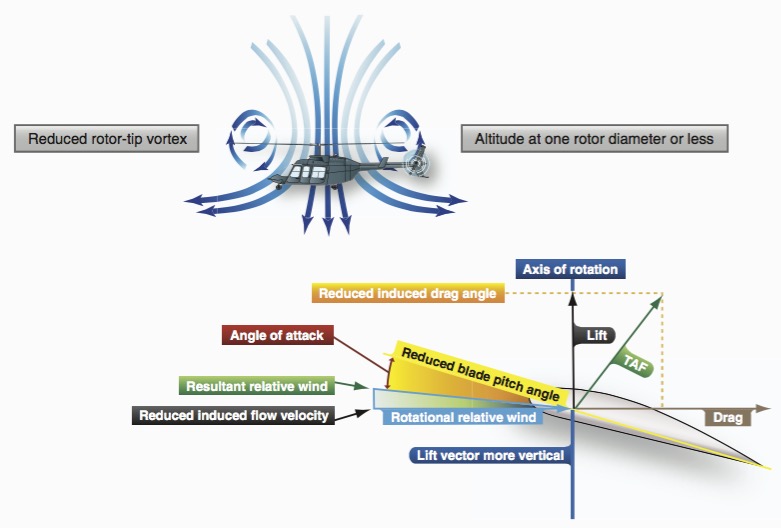 Hovering Out of Ground Effect

Out of ground effect, our induced flow increases again, therefore lowering the angle of attack and lift production. This forces us to add pitch to the blades to produce the same lift relative to an in-ground effect hover. This increase in pitch must be accompanied by an increase in power and, sadly, drag. 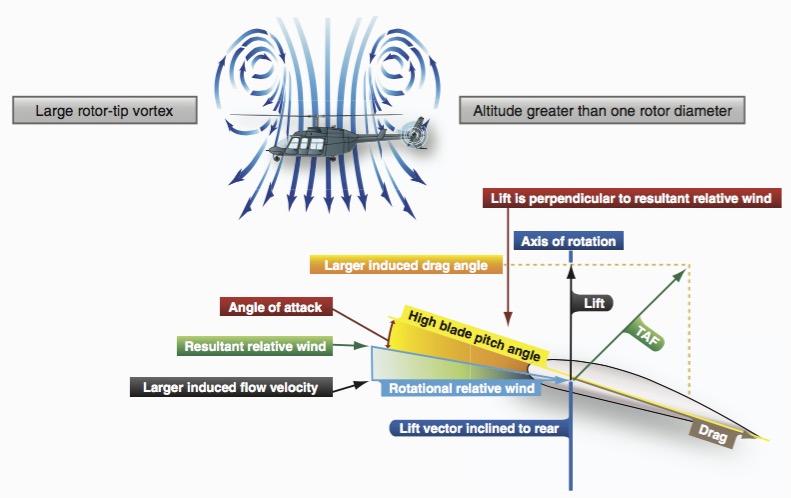 
Effective Translational Lift (ETL) is the additional lift provided by entering forward flight, out of the turbulent air created by the main rotor system. The rotor typically is clear of its vortices at approximately 16-24 knots of airspeed. Note this can be forward airspeed, a headwind, or a combination of the two. 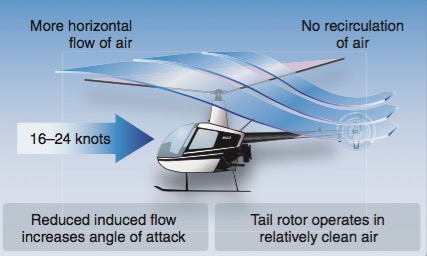 Transverse flow refers to the tendency of the helicopter to roll right as it accelerates into forward flight. The induced flow drops at the forward disc area (increasing angle of attack) and increases in the aft portion (reducing angle of attack). The difference in lift created by these two areas is called the transverse flow effect. Due to gyroscopic precession (see below) the force at the fore part of the disc results in a right roll 90 degrees later.


The law of conservation of angular momentum (Coriolis effect) says that rotational energy must remain constant unless acted on by an external force. The main rotor blades are subjected to both an outward (centrifugal) and upward lifting force as lift is generated. When this happens, the blades bend upward somewhat, thus reducing the diameter of the rotor disc. When this diameter is reduced, the rotor RPM must increase due to the Coriolis effect. 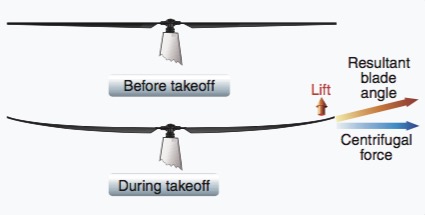 
One of the principles of gyroscopes is referred to as precession. Gyroscopic precession tells us that a force applied to a point on a gyroscope will produce an action (or result) 90 degrees later in the direction of rotation. For example, if we use the cyclic to move a helicopter forward, the blade angles are actually changed at the 3 o'clock and 9 o'clock posisions to account for gyroscopic precession. 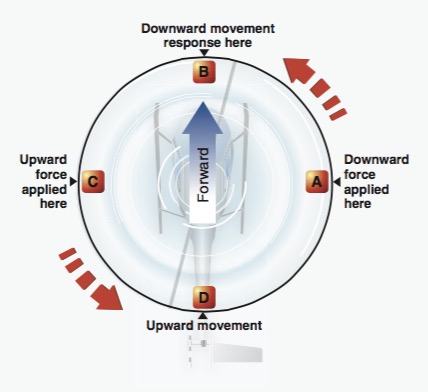 
A helicopter with a counterclockwise rotating main rotor will produce torque in the clockwise direction (again, Newton's Third Law) as power is added. We rely on anti-torque pedals to change the pitch of our tail rotor blades to counteract this torque, so we can keep the nose pointing straight ahead.

The helicopter has a tendency to move in the direction of tail rotor thrust. This is called "translating tendency". 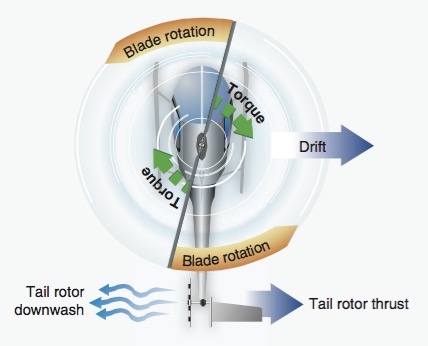 
The lift equation tells us that lift is proportional to the square of an airfoils airspeed. A helicopter has a blade advancing into the wind that has a higher airspeed than the blade which is retreating away from that same wind. Due to the difference in airspeed between the two, the advancing blade produces more lift than the retreating blade. We call this "dissymmetry of lift".

The rolling effects produced by dissymmetry of lift are not desirable. To counteract this, the advancing blade flaps up reducing its angle of attack and lift production.

The retreating blade flaps down increasing its angle of attack and lift production.

Here's a good YouTube video on dissymmetry of lift.


Unfortunately, all good things must come to an end. At a sufficiently high airspeed, the angle of attack on the retreating blade reaches its critical angle of attack and the airfoil begins to stall, ending the production of lift. This causes the helicopter's nose to pitch up (again, gyroscopic precession), reducing the forward airspeed, and largely self-correcting the problem. 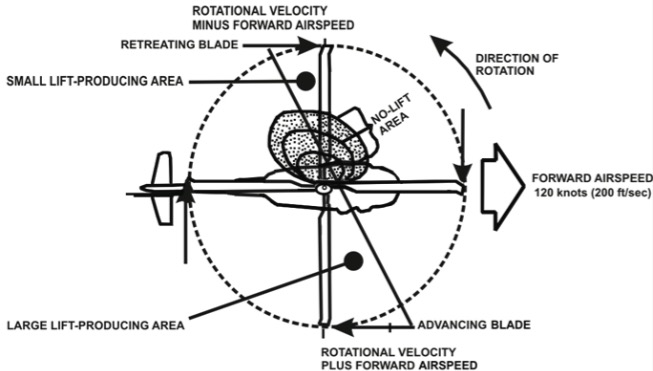